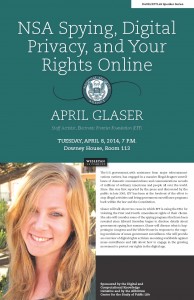 The U.S. government, with assistance from major telecommunications carriers, has engaged in a massive illegal dragnet surveillance of domestic communications and communications records of millions of ordinary Americans and people all over the world. Since this was first reported by the press and discovered by the public in late 2005, EFF has been at the forefront of the effort to stop illegal activities and bring government surveillance programs back within the law and the Constitution.

Glaser will talk about two cases in which EFF is suing the NSA for violating the First and Fourth Amendment rights of their clients. She also will consider some of the spying programs that have been revealed since Edward Snowden began to disclose details about government spying last summer. Glaser will discuss what is happening in Congress and the White House in response to the ongoing revelations of mass government surveillance. She will provide an overview of digital rights activism mounting worldwide against mass surveillance and talk about how to engage in the growing movement to protect our rights in the digital age.